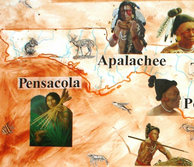 Apalachee    Apalachee Province was bounded by the Aucilla and Ochlocknee rivers, around present day Tallahassee. The area was characterized by hardwood forests and fertile soils in the uplands with lakes and rivers providing both aquatic resources and access to the coast via canoes. Rich estuaries and wetlands along the coastal plain formed the southern boundary of their natural environment. This idyllic setting supported a fully sedentary chiefdom whose economy was based on intensive agriculture. Their mainstays of maize, beans, and squash were supplemented with hunting, fishing, and gathering.

They were all under the jurisdiction of a principal or paramount chief who, at the time of Spanish contact, resided at a village called Anhaica. There is some documentary evidence to suggest that there may have actually been two paramount rulers: a wartime chief who resided at Anhaica and a peacetime chief who lived at the village of Ivitachuco. However, with the arrival of Spaniards, the wartime chief prevailed. The chiefs of these two villages were identified as brothers by Florida’s Spanish governor..

The most commanding feature of every major village was its council house, the largest of which measured over 120 feet in diameter. These were large circular buildings covered with palm fronds. Council houses had concentric rows of benches. 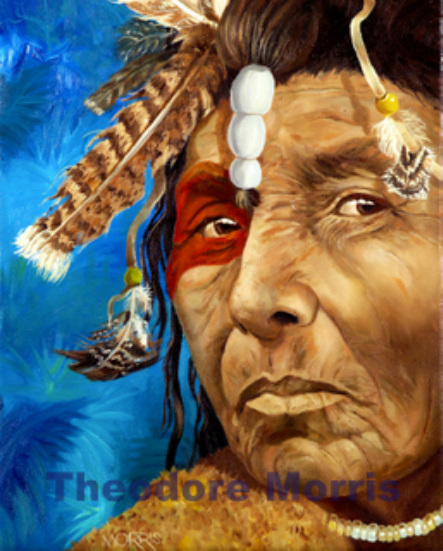 OIL ON CANVAS   11''X14''   $950
In this painting, I concentrated just on the face to involve the viewer in this warrior's life. I created a more dynamic composition by the use of a normally calm blue background against the dramatic stoic brown face.

“The Indians are exceedingly ready with their weapons, an so warlike and nimble, that they have no fear.”
(Hernando de Soto narratives, 1539) 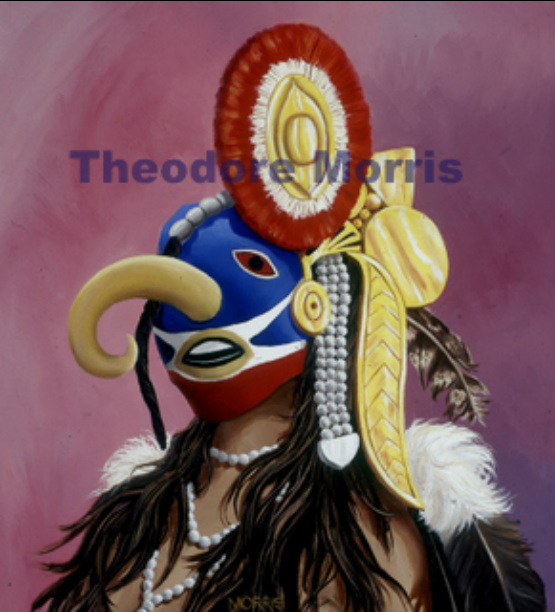 OIL ON CANVAS   20''X18''   $1,600
As with other Native American tribes, birds held a strong spiritual connection for the Apalachee tribe.The colorful painted wood mask with its beautifully crafted copper attachments and feathered circle convey an emotionally expressive statement. This painting is based on an engraved copper breastplate found with a burial of a woman near Tallahassee. 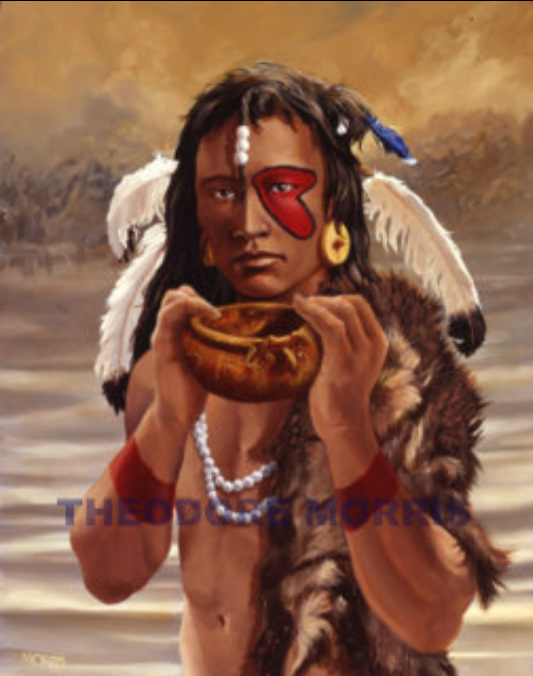 Owls had a special relationship with the the Apalachee peoples' religious beliefs. This Shaman's face paint design and forelock with beads are based on an engraved copper plate found near Tallahassee. I used muted warm colors to achieve a spiritual quietness that the viewer is invited to participate in.

“...now the expedition came to another plain where the Indians had taken the position, having made a very strong barricade, and within it there were many Indian Braves, painted red and decorated with other colours which appeared very fine.”
(Rodrigo Rangel, member of Hernando de Soto's expedition, 1540) 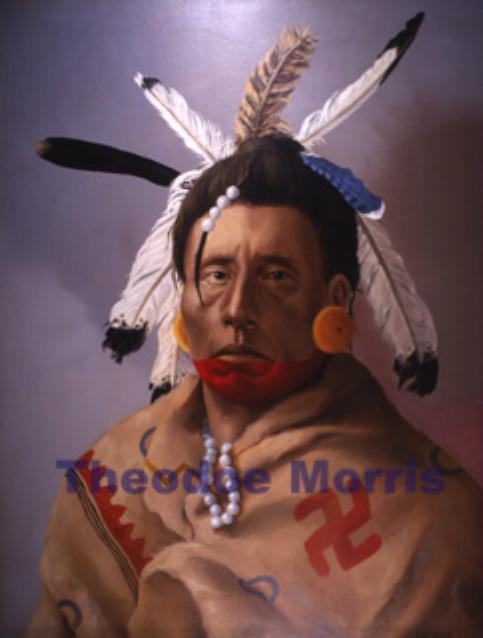 “In order to give battle they dress themselves elaborately, after their usage , painted all over with red ochre and their heads full of multicolored feathers.”  Spanish Missionary, 1700
This intense warrior wears a painted deerskin robe to protect himself from north Florida's frigid winter weather. The symbols decorating the robe were taken from Apalachee pottery.

ARTIFACTS & OBJECTS
“...how the expedition came to another plain where the Indians had taken the position, having made a very strong barricade, and within it there were many Indian Braves, painted red and decorated with other colours which appeared very fine.”
(Rodrigo Rangel, member of de Soto's expedition, 1540) 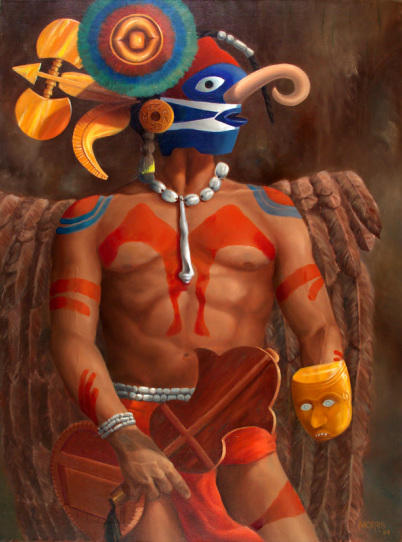 As with other American native Indian tribes, birds held a strong spiritual connection for the Apalachee tribe. I painted the colorful wood mask, with its beautifully crafted copper attachments and feathered circle, to convey  emotion and a sense of tradition. This was my first Florida Indian painting. It was only accomplished with the expert assistance of archaeologists George Luer and Jeffery M. Mitchem, who spent hours in helping me get it as correct as possible.

“We will speak of the country of Abalachi,... where resounds the fame of its abundance of pearls; and it is certain that they do exist.”
(Escalante de Fontaneda)