Paleo Indians   Who were the first people to live in this land we now call Florida? When did they arrive, where did them come from, and how did they survive? How did they interpret the world around them?

How did they change through time and who did they become? These are some of the many questions archaeologists and anthropologists are investigating and contemplating about our earliest Floridian and New World ancestors. With no written record or eyewitness historic accounts, how do we know what we know about these early inhabitants?

We know much of what we know about these earliest people from the study of their physical remains and what they left behind (archaeology and physical anthropology) and reasoned interpretations from more modern societies (ethnographic analogy). However, because of their sparse population, span of time, changing landscapes and environmental conditions since their arrival, and generally poor artifact preservation, little material evidence of their presence remains. In fact, they are one of the least understood and most controversial groups of people known, not only in Florida, but the Americas, and their arrival presents one of the greatest mysteries in the archaeology of the New World.

So what do we know about how these first peoples entered the New World? The earliest and most popular entry theory for the first Americans is by way of the 1,200-mile-wide Bering Strait “land bridge” known as Beringia, between Siberia and Alaska. Peoples were believed to have walked through an ice-free corridor that opened between two Canadian glaciers approximately 14,000 years ago near the end of the last ice age following herds of bison, mammoth, mastodons, and other land mammals. As sea levels rose with melting glaciers, the land bridge flooded behind them. 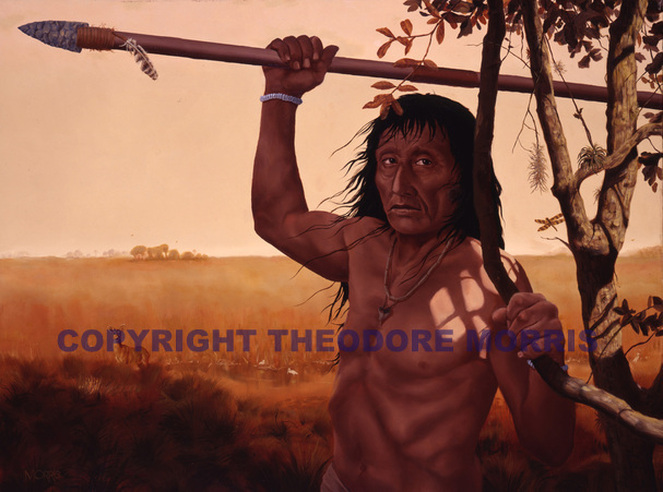 This hunter lived in Florida 13,000 years ago.
OIL ON CANVAS  30''X40''   $5,000  SOLD
13,000 years ago, a hunter signals another tribal hunter as he tracks a deer through the dry grasslands of Ice Age Florida. Deer and  other Ice Age animals were hunted for food as well as other uses. The hunter wears shell bead bracelets and a shark tooth pendant. His spear point is crafted from a brittle chert stone that is chipped to a sharp point. A hawk feather is attached to the spear that perhaps will help him to throw accurately. I used numerous shades of brown paint to convey the dryness of Florida at this time in history. The Paleoindian culture existed from 12,000 B.C. to 6,000 B.C. 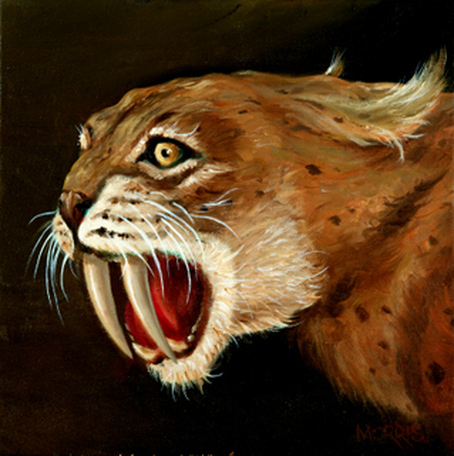 OIL ON CANVAS   12''X12''   $400
This cat roamed Florida 10,000 years ago during the Pleistocene ice age. It was about the size of a present-day lion and used stealth and ambush rather than speed to hunt. The dark background serves to enrich the colors of the animal and also amplifies the dangerous energy of this carnivore. 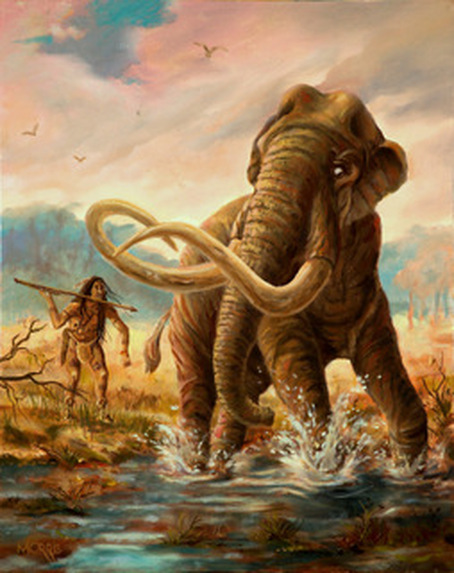 OIL ON CANVAS   20''X16''   $1,400
A cautious hunter stalks a Florida mammoth that is mired in the mud of a riverbank. The hunter takes advantage of this unique opportunity to get in close enough to use his large spear.