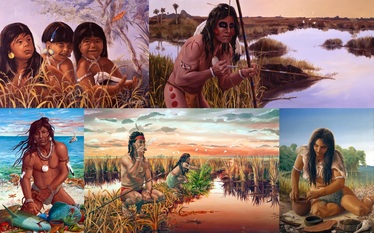 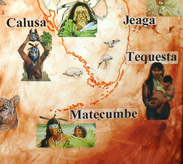 Tequesta & Keys    The Tequesta occupied southeastern Florida from near present day Boca Raton southward to the Florida Keys. Well adapted to the Everglades and coastal wetlands, they traveled along the coast and into the interior Everglades by dugout canoes.

Archaeological evidence as to the origin of the Tequesta suggests that they had traveled from northern Florida, their ancestors likely canoeing southward from the marshes and lakes of the upper St. Johns River during the Archaic Period 3000 to 5000 years. This likely northern origin is in contrast to a popular belief that Florida’s southern Indians had their origin from the Caribbean or the Yucatan in Mexico.

Settlements tended to be small, likely never having more than 30 to 40 individuals, often representing several extended families. Larger towns were located on the coast, the largest of which was at the mouth of the Miami River. There it was possible for several hundred people to reside, the village population swelling at different time for ceremonies, trade, and important events. Other large villages were located on the New River in present day Fort Lauderdale, and within the Keys. 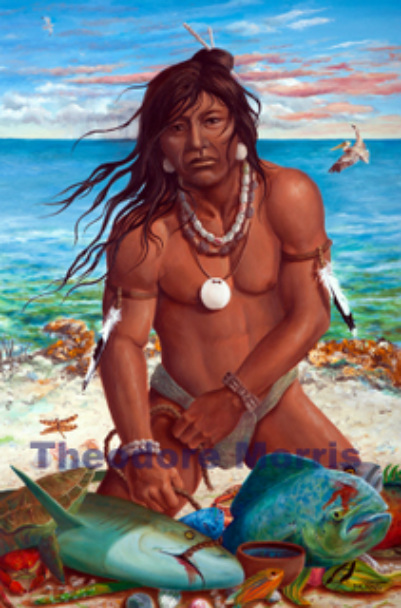 Bounty From The Sea

OIL ON CANVAS   24''X36''   $5,000
With this painting I wanted the viewer to experience the incredible beauty of south Florida and understand the rich marine resources available for this young boy. His face is based on my conception of Florida Indians as somewhere between the sharper angular face of North America Indians and the smoother faces of the South American Indians. I've contrasted his smooth brown skin with the intense light of the background.

“The common food is fish, turtles, and snails, and tunny and whale; which is what I saw while I was among these Indians. Some eat sea wolves; not all of them for there is a distinction between the higher and lower classes, but the principal persons eat them.”
(Escalante de Fontaneda, 1565) 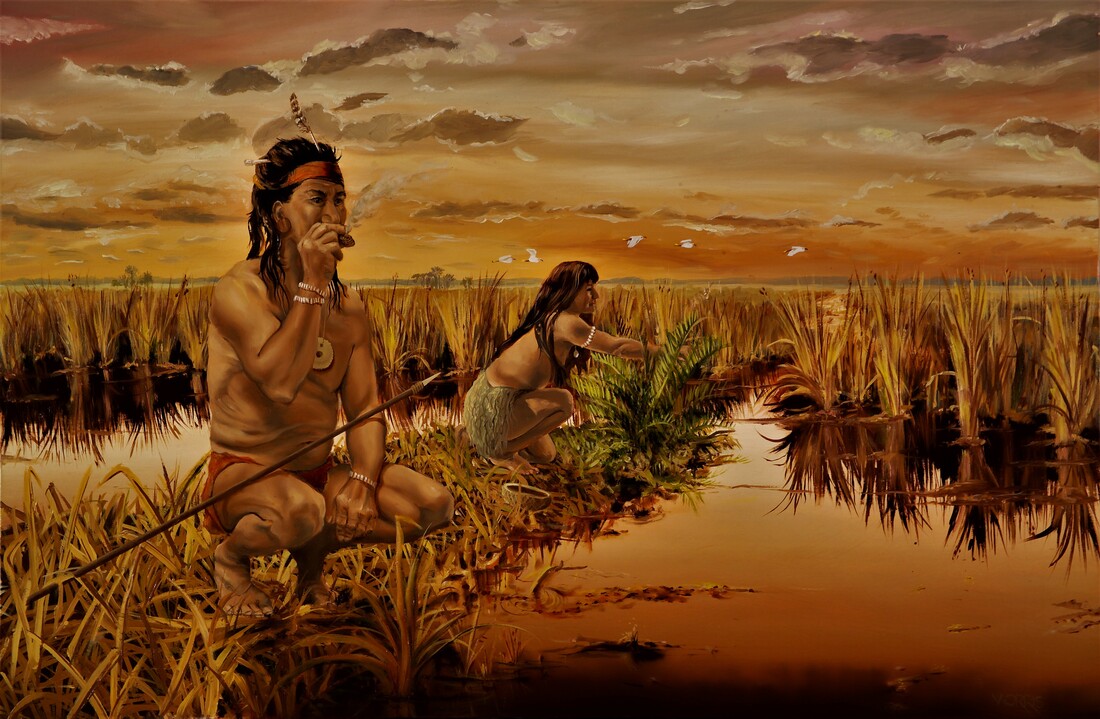 Smoke In The Wind

OIL ON CANVAS   36''X24''   $6,300
A hunter inhales wild tobacco nicotiana from his stone pipe as his wife examines the root of a coontie plant. The tuber (root) of this plant was ground into flour for bread and provided a valuable source of starch for the tribe. I painted the Everglades with rich colors to capture the beauty of this special place. I love capturing quiet moments of everyday life for these people. The grasses on either side move the viewer's eye to the middle of the composition.

“They have bread of roots, which is their common food the greater part of the time...”
(Escalante de Fontaneda, 1565) 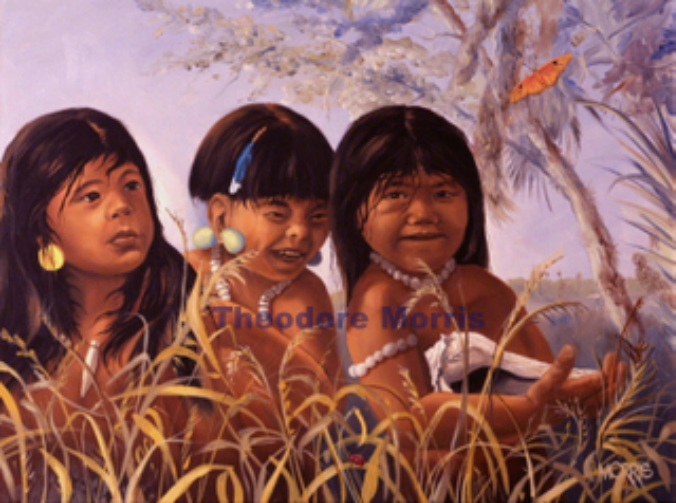 Children Of The Coast

OIL ON CANVAS   18''X24''   $3,900
These Tequesta children are part of their coastal environment. Each child has its own personality as demonstrated in their individual expressions. I showed the atmosphere of playfulness with springy sea oats in the foreground. The muted pastel colors in the background emphasize the energy in the foreground.

As dawn breaks, a Tequesta hunter stalks his prey in the bountiful Everglades. The Indians of Florida consumed all types of animals from their environment. Palm tree hammocks disappear over the horizon like a flotilla of ships. The painted loincloth designs are based on their pottery designs.

ARTIFACTS & OBJECTS
Bone hairpin
“At the very point (of land) of Tequesta there enters into the sea a freshwater river; which comes from the interior, and to all appearances runs from west to east. There are many fish and eels in it.”
(Lopez de Velasco, 1560's) 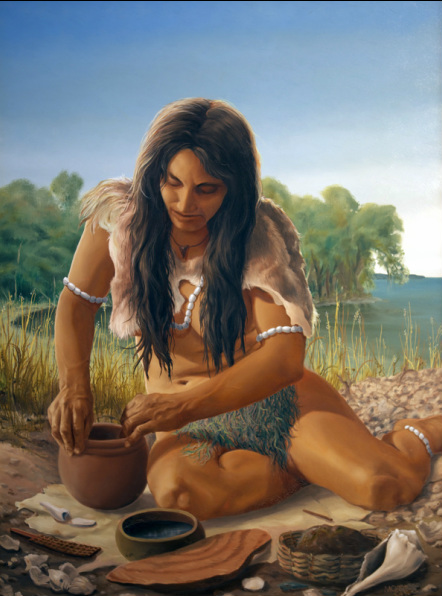 The woman of the Tequesta and other tribes in Florida used the coil method for making pottery. After the pots were shaped and the designs impressed, the clay pots were taken to an open fire to be baked. It is not known for sure if these early peoples considered the clay sacred before the firing, but it is known that certain vessels used in religious practices such as funerary rites were considered sacred.