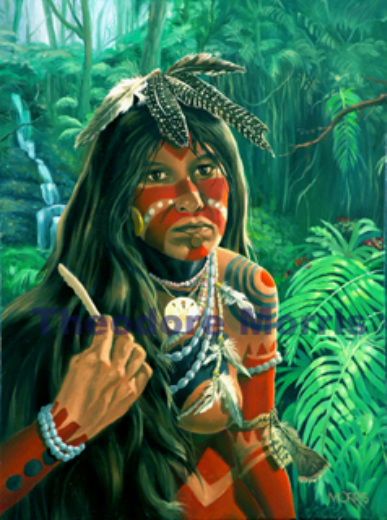 OIL ON CANVAS   24''X18''   $2,600 SOLD
Pensacola villages were clustered around coastal estuaries in northwest Florida. Villages had community-wide activities and ceremonies viewed as necessary for the well- being of the group. Perhaps this maiden is dressed in her finery to attend a tribal ceremony. 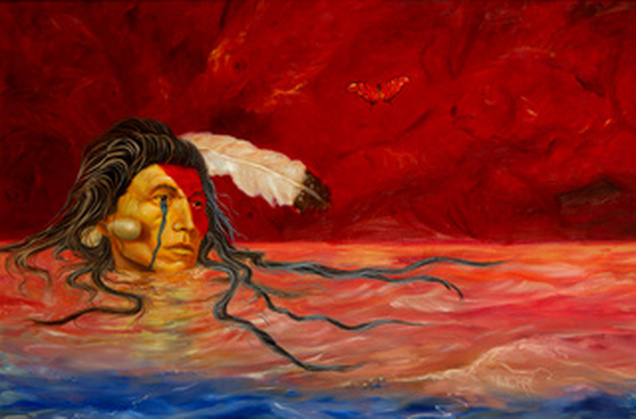 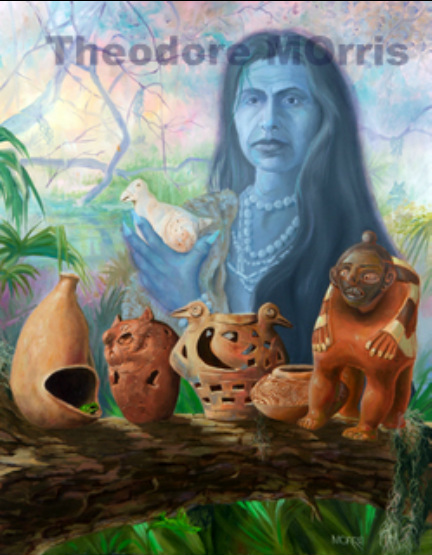 OIL ON CANVAS  28''x22''   $5,800
People living in north Florida made some of the most beautiful ceramics ever created by North American Indians. This culture was called Weedon Island (A.D. 250 to 750) which was named for an archaeological site on Tampa Bay. Ceramics were used in burial rituals. The effigy vessels are more like sculpture than pottery. In this painting I wanted to show the spirituality of making sacred pottery by putting the potter in an environment of pure peace and beauty. 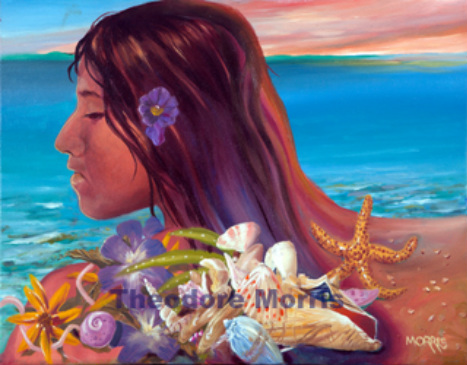 14''x20''   OIL ON CANVAS   $1,200
This painting uses realistic objects to create a colorful design composition.
The native populations of Florida were totally dependent on their environment.
The girl represents all the early Indians that have vanished from Florida. 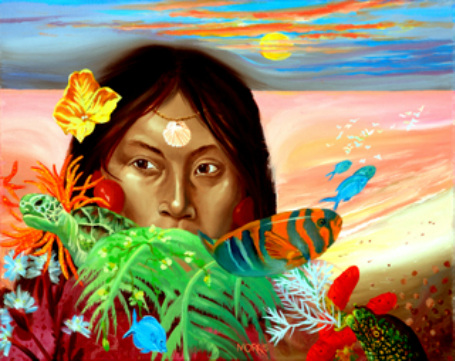 OIL ON CANVAS   16''X20''   $1,400   SOLD
This painting uses realistic objects to create a colorful design composition.
The native populations of Florida were totally dependent on their environment.
The girl represents all the early Indians that have vanished from Florida. 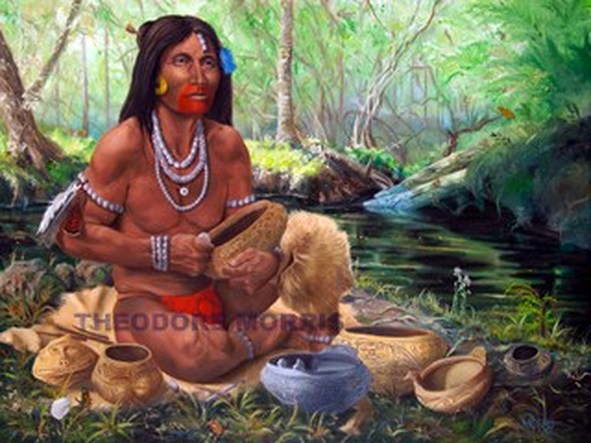 30''X40''  OIL ON CANVAS  $7,000   SOLD
The Ft. Walton culture (Mississippian period 1000 A.D. To 1500 A.D.) was part of a complex trade network linking  peoples from the Gulf of Mexico to the Great Lakes and extending west to Oklahoma. Some pottery was made from clay containing ground up potsherds or Spanish moss (temper) which made the pottery stronger and less likely to crack during drying. Coils of clay were constructed to build pottery. Elaborately decorated vessels were generally made for use as part of a ceremony. I put the potter in a cool shady area to invoke the idea of peace and spirituality. 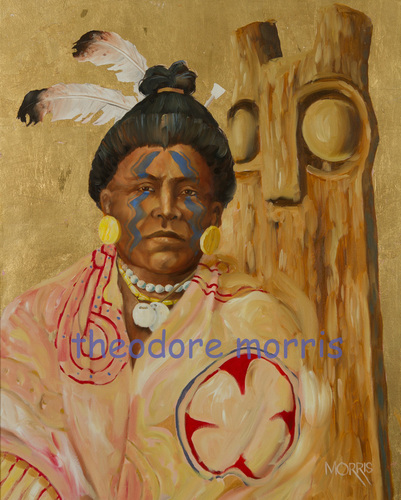 "Gold" leaf was used as the background.The totem was carved from heart pine and was found in a river. 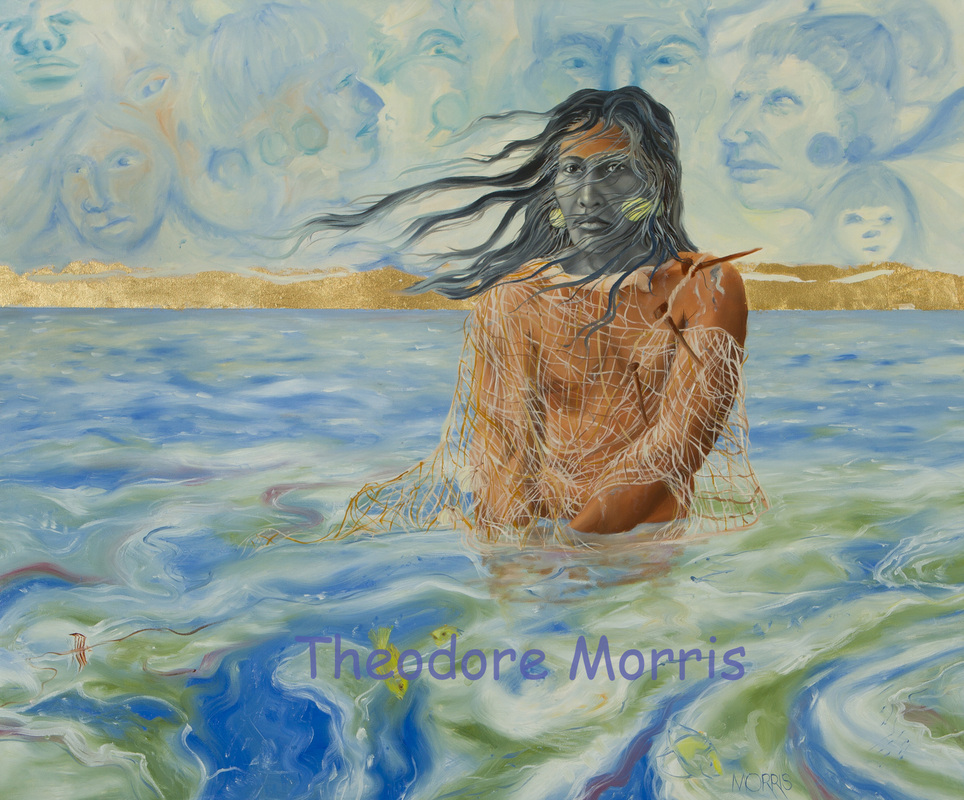 With a strip of "gold" leaf, I separate the present from the past.

The first Spanish to explore Florida were slavers. This created hatred for the early Spanish arrivals. 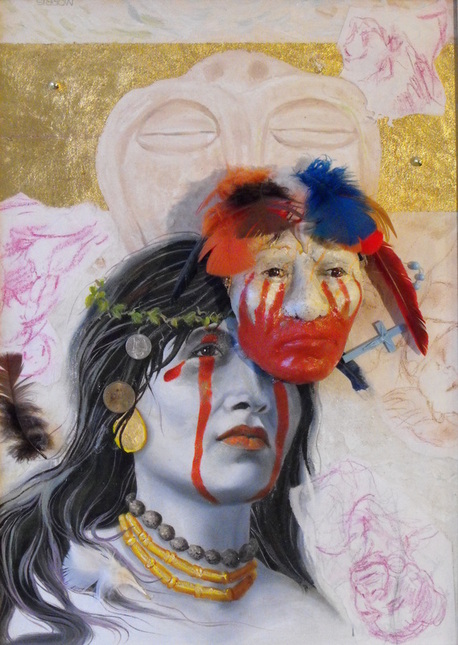